Data is everywhere. It's being produced by almost everything around you. In order for businesses to be competitive, they need to build resilient, scalable systems that can efficiently tap into and react to this ever-increasing volume of data.

Enter: streaming data pipelines. Apache Kafka is a distributed event streaming platform that allows you to move and transform data in real-time. Throughout this workshop, you’ll build up a solid foundation and understanding of Kafka, learning the basic building blocks of the technology, its components, as well as how to produce and consume data. From there, you’ll get hands-on experience ingesting data from external systems into Kafka using Kafka Connect, joining and transforming Kafka data in real-time with ksqlDB stream processing, and using Kafka Connect to move data to downstream systems.

By the end of the workshop, you'll understand the value of real-time data and have everything you need to start building your own streaming data pipeline. 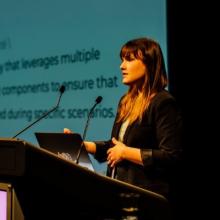 Danica began her career as a software engineer in data visualization and warehousing with a business intelligence team where she served as a point-person for standards and best practices in data visualization across her company. In 2018, Danica moved to San Francisco and pivoted to backend engineering with a derivatives data team which was responsible for building and maintaining the infrastructure that processes millions of financial market data per second in near real-time. Her first project on this team involved Kafka Streams – she never looked back. Danica now works as a Developer Advocate with Confluent where she helps others get the most out of their event-driven pipelines.

Outside of work, Danica is passionate about sustainability, increasing diversity in the technical community, and keeping her many houseplants alive. She can be found on Twitter, tweeting about tech, plants, and baking @TheDanicaFine.